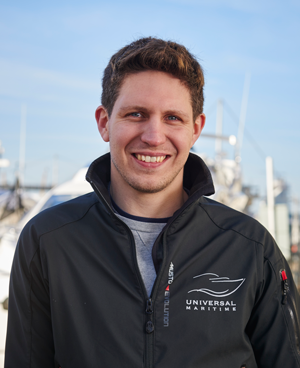 Sean's Maritime career began when he joined the containership giant CMA CGM as a Deck Cadet in 2010. After graduating with a Foundation degree in Marine Science & Navigation he went on to attain his Officer of the Watch and has seen service on a number of vessels including containerships on worldwide routes, standby vessels in the North sea, Dredgers in Northern Europe and most recently aboard superyachts.

Whilst training for his OOW Sean was a member of the university Yacht club where he was first introduced to sailing. He then went on to complete the RYA Day Skipper, Yachtmaster and Powerboat Level 2 qualifications before ultimately getting involved in a crewing for yacht deliveries, and working as a deckhand for a local pleasure boat company.

Although currently working as a Deck Officer on large superyachts, Sean joined the Universal Maritime team in January 2015, offering crewing services when in the UK.